Is it better to be selfish?

After many weeks of writers block ("bloggers" block?!), my creative juices have started to flow once again.  Part of  the reason for my rejuvenation was my father, part of it was my recent California trip, and part of it was Purba Ray's blog, which I follow regularly.

Last weekend was another typical weekend -- way-too-short, too many things to do and too little time to do it.  Once again, another week had passed by in a flash.  As usual, I did the dishes, helped with the laundry and getting the kids fed.  I did my duty.... things I had to do, as a parent and a husband.  A lot of things got done, but many others were still pending.  These were things I wanted to do, and as usual, there just wasn't enough time for them.

You see, I have a huge wishlist of things that I want to get done before I die but often wondered whether I'll get to do all of them... or even half of them.  Ever since I was a little kid, my parents (mainly my father) often lectured me about the importance of duty and hard work.  My father was the strict type who believed that harsh discipline and tough love was the key to success, self-reliance and building character.  As a mechanical engineer, he would toil for countless hours at the office but only spent a handful of hours really enjoying life.  I suddenly started thinking about this about four months ago when I had decided to visit the Bay area.  I didn't want to be a nonstop workaholic all my life the way my father was!  Nope.... I wanted to live life, visit San Francisco, see the Golden Gate bridge, go to Napa Valley.... pretty much do all I could in the short time I was there.  I wanted to play as hard as my dad worked.  A fire inside me was lit, and nothing could stop it!

San Francisco, here I come, I thought to myself.  So I did it all.  Even with the added burden of dragging my wife and two small kids everywhere, I still managed to explore all the things the Bay area had to offer.... and it felt great!  And the reason?   Because I did it for me... for my enjoyment!  Yes, I wanted my wife and kids to have fun too, but I was going to live it up regardless of whether they did or not.  And that's when I noticed a revelation in me -- I was suddenly feeling much more energetic and alive than ever before! 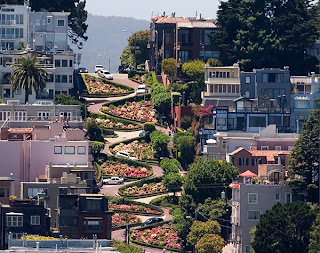 I drove through Lombard Avenue (the "crooked" street, shown above) with utter ease, up and down, left and right, sideways and forward.  The rental car's brakes almost failed, but my resolve did not.  I kept on  exploring, walking up the Golden Gate bridge in style, driving through 'Frisco's streets, maneuvering through the plethora of traffic and pedestrians all around. There were many logistical challenges, but on that day, nothing seemed too difficult... not for SuperTouristMan!!  No, I happily squeezed my rental car between buses, cable cars, anything San Francisco could throw at me.  Shit, if I can handle the brutal Chicago winters all those years, I can handle this architectural nightmare of an overpriced, yet fun & touristy city, I thought.

And so, my bravado continued on that day and through the rest of the two weeks in California.  And that got me thinking.... should I be like this more often?!  Should I make enjoyment my top priority?!?!  I admit, I was feeling a bit guilty at first for thinking so selfishly, but then real life examples came to mind.  Donald Trump, Mark Zuckerburg, Lakshmi Mittal, Mukesh Ambani... did they get to where they were in life by being selfless?  Of course not! Yes, they worked hard... but they enjoyed their job so much that it was mostly play for them.  Heck, even some of my past co-workers enjoyed life a lot more than I did just by being more selfish about what they wanted.  Once I realized that, I also started to do the same, and I'm much better off for it.  I delved more into personal interests that I put off for a long time. This blog itself is one such indulgence -- I do it for myself and no one else, and it feels great!  Yeah, it's a bit selfish... but so what?!  If Purba Ray would rather be a bitch, why can't I be a self-indulgent asshole once in a while?!

Now, this post isn't meant to send the wrong message by saying that you should be completely self-absorbed to the exclusion of all else.  The only message I want to send across is that you should make the most out of your limited time here on this earth.  Yes, it's good to be selfless, but before you help other people, shouldn't you help yourself first?  After all, if you don't take care of yourself, who will... the government?!?!
Posted by Dark Knight at 8:23 AM

Email ThisBlogThis!Share to TwitterShare to FacebookShare to Pinterest
Labels: better to be selfish San Francisco

Dark Knight
It's not who I am underneath but what I BLOG that defines me. I blog to vent and to express myself. Writing is the one medium that never fails me!